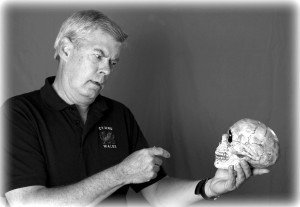 Tom has words with a stubborn plot device.

All writers groups are not the same.  Each one has its own dynamic which works for its members.  So if you want to start a group, you can use our guidelines to help you get started, but they are only guidelines.  Like us, you’ll have to navigate the various problems and issues that arise in your group in the way that works best for you. Obviously, writers groups can work.  Ours was founded in 1988 and is still going strong. We have achieved our original goals of all members becoming better writers and making professional sales.

If you’ve been part of one (or more) and it/they haven’t worked for you, you were in the wrong group. In our group, our focus has always been to produce salable works.  In other words, we write, we revise, we query agents, we contact publishers, and, now that we have Word Posse, sometimes we publish our works on our own.  We don’t just sit around and talk about doing it “someday.” Our goal was for all of us to sell at a professional level, which we did. Other writers groups have different goals.  It doesn’t matter so much what the goal is, provided everyone shares it.  So Rule 1 for writer’s groups: Have a goal, then be focused and stay focused. Also, it’s okay for new members of the group to be complete amateurs.  Doesn’t matter if they’ve sold anything, doesn’t matter if they’ve yet to produce a salable manuscript.  The trick is, do they have the will?  Are they going to take critique, revise those stories, submit those stories, take the inevitable rejection letters in stride, and keep on going?  Those are the marks of a winner. Sharon joined our group with a couple of novel sales under her belt, and Tom had a short story sale, but the rest of us started with the group with no sales.

Rule 2: New members don’t have to be great writers and certainly don’t have to be published. They just have to have the drive to succeed. Your members have to submit their work to the group on a regular basis.  When most of us were doing short stories, the rule was to submit something at least every other month.  Now that we’re mostly writing novels, that rule has largely fallen by the wayside.  Still, we do keep a check on each other to keep up on what everyone’s doing.  Originally, the rule to join the group was to submit a novel or three short stories – this was to make sure the person applying for membership was serious enough to start and finish their projects.  Even if the stories were awful, just the fact that the person was producing arcs that had beginnings, middles, and ends, was the important thing.

Rule 3: Practice, practice, practice. You won’t get better if you’re not producing words on the page. When a work is being critiqued, it is the work that is being critiqued, not the writer. People who critique other people are “sharks” and should be avoided. Personal comments are a no-no. A critique is personal enough; it should not be an attack. Nor should the writer defend him/herself.  Take the criticism, weigh it and see how it feels to you, then take it or discard it. To this end, we have the “bother factor” in our group.  If something only bothered one person, it’s probably okay.  If two or more people noticed something, there’s a problem you need to consider seriously, even if you end up not changing anything.  And if everyone had the same issue with your text, you’d be wise to change it.

Rule 4: Critique the work, not the writer. Your comments should help the writer make the work better or what’s the point? Things we do not do include critiquing partial novels and reading out loud.  You won’t be there at the editor’s desk to read your work to them, so there’s no reason for you to read it to the group.  Also, with rare exceptions, we generally do not allow visitors. We hope these pointers can help you start a writers group of your own if that’s what you want to do. It takes a lot of work and a certain blend of personalities for the thing to fly, but if it does fly, there’ll be no stopping you!