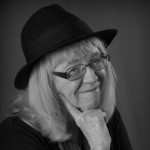 Debbie is one of two remaining original members of the writers group Alternate Historians, which was formed in 1988 after a writers workshop at a local St. Louis con.

Debbie is a native of Illinois, is married, and has three grown children.  She is the “Kitchen Fairy” and “Comma Master” of the writers group. You have not had angel food cake until you’ve had Debbie’s angel food cake.

Her book, Thief’s Luck, was published in 2006.  Debbie has also published many short stories, including a story in the anthology Gifts of Darkover.