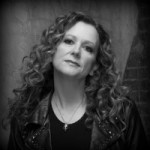 Laurell is one of two remaining original members of the writers group Alternate Historians, which was founded in 1988 after a local St. Louis convention.  Laurell’s first book, Nightseer, was published in 1992, and since then, she has enjoyed phenomenal success, including spending time on the New York Times Bestseller List.

Both her Anita Blake and Merry Gentry series have been extraordinarily successful.  The first several Anita books have been adapted to comic book form by Marvel Comics.