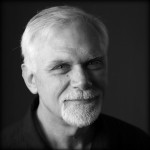 Mark is the author of a bunch of novels, lots of short stories, and essays (full list).  His novel Devil’s Tower was nominated for the World Fantasy Award, and his News from the Edge series was turned into a TV show called The Chronicle, which aired on the Syfy Network. Under the name Kenyon Morr, Mark and Marella co-authored two novels for Boulevard Books, Kingdom of Sorrow and See No Weevil.

Mark has held nearly every job known to man, including coal miner, USGS cartographer, newspaper photographer, and database architect.  He has dug for dinosaurs in South Dakota. And he used to know the genus and species of every freshwater fish in the United States.

When he isn’t writing or working or blogging, Mark enjoys paddling out on the lake in his kayak and watching the resident osprey hunt for his breakfast.  The lake used to contain a lake monster, but Mark hasn’t spotted him in a while.